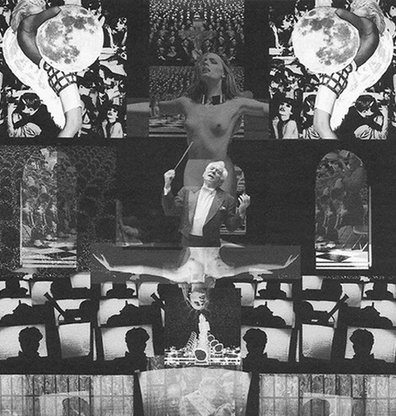 I have released this work to coincide with the upcoming celebration of musician and composer Leonard Bernstein whose Musical compositions will be performed this fall at London Barbican by resident London Symphony Orchestra, to celebrate his 100thbirthday.

Attached to this document is an illustration of the twelve-panel collage along with some additional information on this artwork.

Nathaniel - “In all honesty prior to creating this piece of work I had known very little about Leonard Bernstein, totally oblivious to his stature, accolades and accomplishments. My only encounter of Bernstein being a few portrait images I came across a few years back.

I obtained two or three photographs while building a personal archive of images intended only as creative references. During this process there were something particularly special about these Bernstein images, possibly the mixture of emotions he expressed through his facial and bodily language, feelings such as thought, discomfort, passion, pleasure and or intimacy.

These images simply embodied the phrase ‘a picture could say a thousand words’. I felt compelled, so I began curating.

When creating this work my aim was not so much to simply showcase ones creative ability but to create the right environment that would highlight and compliment the true beauty and essence of the image, and reflect how best how I felt towards this image of him through this illustration. A dialogue between Man and Creator”

From conception and during the process of this creation I tried to understand the significant role a conductor plays in the orchestra and what this truly meant. One art panel turned into thirteen.

As time revealed key characteristics and attributes required to carry out a title as conductor, and the responsibilities such as trust, to preserve, sustain, nurture and develop whom and what you have been entrusted.

As these attributes were revealed over time it was becoming evidently clear that what I so admired in observation of the Bernstein image was the weight of responsibility that roles and positions of significance brings to one entrusted to maintain what is deemed pleasing in His sigh, and to deliver to the current generation, less they forget.

I admit that at the time of conception ones youth would not have done this work any justice. Time would refine who I would become as an artist and fundamentally what I wanted to communicate through my work, and only now would I then be able to deliver a piece of work that could celebrate such an individual for such a time as this.

“A DIALOGUE BETWEEN MAN AND CREATOR”

“A DIALOGUE BETWEEN MAN AND CREATOR”

This Artwork is a series of digitally illustrated photographic colleges images, that when assembled together create a 13 piece motif. This collage was composed over a seven-year period using both personal photographs and digitally sourced images, arranged and edited to create a multi panel collage.

The aim through this art is to deliver an illustration that would portray the message of life’s journey and the possibility of an intended outcome according to ones faith.

This most recent collection has been inspired by a 1400’s painting entitled The Retable of St George. This composition hangs at the heart of the Raphael Cartoons gallery in the London Victoria and Albert museum. The Retable of St George like many classic religious artworks pays homage to writings throughout and proceeding biblical scripture, nevertheless it has been the multiple panel arrangement of the Valencia masterpiece that would most have an influence on this work.

I thought it significant to create a multiple images collage that could be viewed both individually and also united in a full arrangement. As a whole each panel and illustration plays an equally significant role in the overall complete aesthetic.

This composition Illustrates that one should always consider the bigger picture within and outside your sphere of influence, life is such that collectively all elements and events could have an impact on ones journey towards destiny, be it positive or negative, instant or gradual you will reach an intended outcome, and it shall be according to your faith.

During composition I have made a conscious choice to use modern images to portray a timeless historical journey in a visual that today a present day modern society can relate. Each of the 12 panels was created to visually represent the process, development and expectation according to one’s faith.

I have made it a priority to pay homage to the history of iconic Christian art by referencing characters such as Mary, The Angels, Saints, The Holy Spirit, The Christ, The Father and The Church.